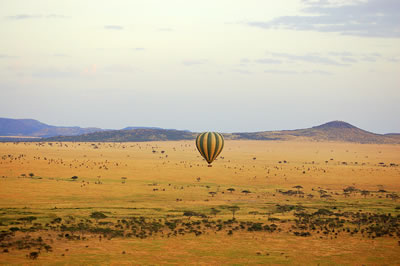 Adrift Over the Serengeti

The sun had not yet risen when I helped my new friend Ruth into a sideways compartment of the hot-air balloon basket and climbed in beside her. I had asked Ruth to be my partner for two reasons. First, she reminded me of my mother, and second, she was the smallest person there.

Our gondola was on its side, on the ground. We lay on our backs in the twilight, hearts pounding, with only our heads outside the basket. My wife and son worked their way into the compartment directly below us, and six more pairs of people situated themselves for the launch.

It took powerful fans about 20 minutes to inflate the balloon with unheated air as it rested on the ground. When the group was ready for take-off, our pilot started the kerosene engine and sent a 10-foot-long burst of flame into the center of the envelope.

As the air heated, the balloon began to rise, pulling at our gondola, which was still tethered. At the right moment, the tethers were released and we dragged along for a few feet as we slowly tilted into an upright position. We were aloft, drifting over the Serengeti, when a pale sun appeared on the hazy horizon.

A safari is one adventure after another, but for many of us on this trip, the balloon ride over the Serengeti was the most anticipated feature of the vacation. The operator has two 16-passenger balloons that are launched each morning before sunrise, year-round. The company is well-established and professional, and the cost was included in the price of our Tauck safari.

For an hour we moved with the wind, climbing to 500 feet to see broad panoramas and dipping down to treetop level for a better view of vultures in their nests or hippos in a pond. The ride was smooth and silent except for the occasional "burn" to slow our descent or start us gently rising.

As we neared the end of our ride, we passed over herds of wildebeest and zebras, all moving in the same direction -- column after column of animals, in lines that stretched as far as the eye could see. We had caught up to the Great Migration, and our pilot announced that we were going to land nearby.

Our balloon touched down in tall grass, where we toasted our survival while we waited for the trucks to catch up with us. This was the first and only time during our safari that we were out in the open, surrounded by animals and away from our vehicles. We tried to capture the majesty of the passing migration with our cameras before moving on to a full English breakfast in the bush.

Accommodations on a safari can range from traditional hotels to lodges with bungalows or even tented camps -- fixed or mobile. I can see advantages to each kind, but it was our last stop in the Serengeti -- the tented camp -- that was the most memorable.

Kirawira Tented Camp is not your average Boy Scout setting but a member of the Small Luxury Hotels of the World group. The camp consists of a tented lodge with comfortable seating for 30 and a large mahogany bar, a tented gift shop and two tented dining halls with white-gloved waiters.

There are about 25 guest tents on raised wooden platforms, each with two double beds, mahogany-paneled bathrooms and marble countertops. Other than the floors, the tents are of canvas, with mosquito-net windows and a front door that zips open and a wooden front porch.

This was the only place we stayed without phones in the rooms, so the morning wake-up call consisted of a soft and cheerful "Jambo, good morning" delivered by a camp employee from the front porch, along with a pot of hot coffee and sweet rolls. After dark, animals would roam through the camp, so an armed escort walked guests from the dining halls or lounge to their tents.

On one game drive from Kirawira, we found 16-foot crocodiles on the banks of the Grumeti River. These crocs are among the largest on Earth and are big fans of the Great Migration that brings tasty wildebeest and zebras to cross this river. We stepped carefully onto boulders that extended into the water, looking for a better vantage point for photographs.

It seems that whichever way you look on a crocodile-studded river, there is the unshakeable sensation that crocs are sneaking up behind you from the opposite direction. Picture taking went like this: click, look around, click, look around.

We left the Grumeti in the late afternoon, and in that clean, dry air, you could smell the rain coming. After a brief shower, the clouds parted and one of our guides spotted a cheetah in the wet, golden grass.

Cheetahs are the fastest animals on the planet, capable of hitting 70 mph over short distances. They are sleek and powerful and graceful, and unfortunately they may also be a vanishing breed. We watched and photographed until the sun turned red and dived behind the acacias.

Back at Kirawira, we dined under canvas, and from our perch high on a hill, we watched flashes of lightning from distant thunderheads as they rolled across the Serengeti.