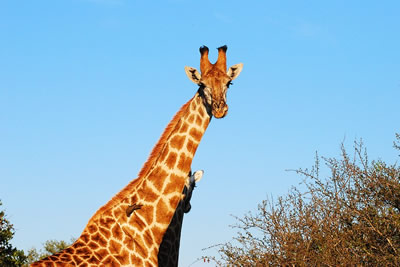 Two hundred yards short of touchdown, the pilot of our 12-passenger Caravan suddenly revved the engine back to full power, pulled the nose up and aborted the landing. We climbed and banked to the right, making a circle to line up for a second approach.

Once on the ground, the pilot told me that a wildebeest had wandered onto the landing strip on our first approach, darting back into the thicket when we buzzed by overhead.

In Africa, one can expect the unexpected. It is good to be back.

I am writing today from the last stop on my safari, the spectacular Singita Lebombo Lodge in Kruger National Park. I arrived two days ago on a short flight from my last lodge.

The land here is beautiful, isolated and rugged. There are interesting rock formations, meandering rivers, sheer cliffs and great vantage points from which to watch the sun set. I've loved the unpredictability of each and every day.

We've had a close encounter with four sleepy lions as they snuggled up together like big kittens. We've trailed small but fearless honey badgers as they chased some unseen prey.

We've watched as hulking, nebulous blobs in dense fog turned into elephants and zebras, and just missed stepping on a deadly boomslang (venomous, green snake) sunning itself on a path.

We counted a dozen motionless crocodiles hiding in the weeds on the banks of the Sweni River, like traps waiting to be sprung. We visited with a herd of skittish Cape buffalo being stalked by a pride of lions.

On our first night at Lebombo Lodge, we dined poolside under Orion and the Southern Cross. Last night, we danced to local music with the Tsonga tribe in a torchlit boma.

Kruger is South Africa's largest game reserve, by far, stretching 220 miles from north to south and 40 miles from east to west. Most of the park is open to the public but nine large tracts of land have been set aside as privately operated "concessions" that hold long-term leases.

Lebombo Lodge shares one of these huge, private concessions with sister property Sweni Lodge. The concession is leased by Singita and located in the southeastern region of the park, on the border with Mozambique.

The biggest advantages of the private concessions are the high quality of the accommodations and food and service, the low number of guests and vehicles allowed inside the concessions and the fact that the private owners allow their guides to leave the roads to get closer to the animals. Visitors to the public areas of the park are not allowed to stray from the roads.

Lebombo Lodge features 13 spacious bungalows and a villa that can be configured as two two-bedroom units or one four-bedroom dwelling. The bungalows look down on the life-giving N'Wanetsi River.

The walls of the bungalows are made of glass, with wooden screens for shade and privacy. The interiors are beautifully decorated, open and contemporary, and filled with natural light.

Elevated back decks are perfect for game viewing or lounging on a sleepy afternoon. There's a king bed inside and a smaller bed on the deck, covered with mosquito net, for anyone who'd like to sample sleeping outside.

I had to try this and can recommend it to anyone who doesn't mind an occasional unexplained screech from the great, black beyond.

Service is the name of the game at Lebombo Lodge, with a friendly staff that anticipates every need.

There is an outdoor restaurant (poolside) and a boma, for cookouts by the fire. A bar, lounge, self-serve deli, fitness center, library, wine studio, boutique and gallery round out the amenities.

Gazing out the window from my bungalow, it's hard to imagine that South Africa suffered through the worst drought in recorded history in 2015 and 2016. Today, Kruger Park is lush and green for as far as the eye can see, but last year there was not a single blade of green grass to be found anywhere.

Plants withered and disappeared, and meadows changed to deserts. All but the deepest waterholes turned to sludge and then to cracked, sun-baked earth.

Animals that depend on grazing, such as elephants and buffalo, were the worst affected, along with hippos, which spend most of their day submerged in water. As these enormous animals grew weak from hunger and thirst, they became easy prey.

There's a thin line between "eating" and "eaten" out here.

While drought is a disaster for some species, it is a bonanza for others. With food so readily available, the number of predators and scavengers--such as lions, hyenas and vultures--actually increased.

Finally, in January of this year, the rains returned to Kruger. Now that the water holes are filled and the rivers are flowing again, the decimated populations of elephants and hippos and buffalo are bouncing back, but it will take years to reach their former size.

In the meantime, with so many young mouths to feed and fewer animals to hunt, it is the large lion prides that are under pressure.

A safari is a sensory overload and it takes a while to digest what you've seen. There is nobility in the animals and their timeless rituals, a rhythm to the rain and drought. But the entire system is at risk in the age of exploding human populations.

If you are like me, you will leave your safari certain that this all must be protected for future generations. That's why Vacations To Go has been a corporate sponsor of the Dian Fossey Gorilla Fund since I trekked to visit a gorilla family in Rwanda's Volcanoes National Park in 2010.

Vacations To Go supports the wonderful people who protect the last 900 mountain gorillas from extinction. We are a very, very small part of an incredibly large conservation effort that must succeed throughout this continent and the others.

As one of the leading operators of concessions, reserves and accommodations in Africa, Singita is at the forefront of the conservation effort. The company owns 12 amazing lodges and camps in South Africa, Tanzania and Zimbabwe and is the guardian of 1 million acres of pristine land.

People who go on safari ultimately fund much of this conservation and are an indispensable part of the solution.

In an hour, I'll climb into a bush plane to start my journey out of South Africa. My safari is over far too quickly but I'm not headed home quite yet.

I'll check in next week from the Earth's oldest desert.

https://www.AfricaSafari.com/eating_or_eaten.cfm
Call us at 800-291-3346 or inquire about a vacation here.
Open Mon-Fri 8am to 6pm, U.S. Central Time
Our office will reopen in 55 hours and 51 minutes.
Other Vacations
Guided Tours
River Cruises
Hotels & Resorts
Oceangoing Cruises
Site Info
About Us
Contact Us
International Visitors
Site Map
Terms & Conditions