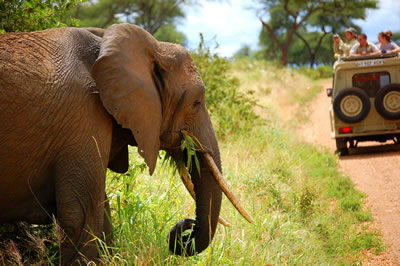 On the first morning of our Tauck safari, we left Arusha for Tarangire National Park in four extended Toyota Land Cruisers. There were 20 guests traveling, four Tanzanian driver-guides and an American tour director, Susan.

We drove through the countryside, passing fields of corn, coffee and bananas before moving into a region where small herds of cattle grazed under the watchful eye of young men and boys from the Maasai tribe. The bright red or purple head-to-shins wraps of the Maasai were a sharp contrast to the green pastures.

We arrived at Tarangire, removed sections of the roof of our safari truck and stepped up on our seats. During the nine days that followed, we rode and viewed game with our heads outside the truck, which is an exhilarating way to travel. Of course, dogs have known this all along.

Our first sighting came within seconds of entering the park and triggered a near-hysterical succession of pointing and exclamations: Elephants! Giraffes! Zebras! Uh... something else! We pinched ourselves to make sure we were really there.

The landscape was rugged and hilly, with thorny acacias and tall grass that was already mostly brown though Tanzania's dry season was only two weeks old. The skyline was dominated by huge baobab trees, and the roads were dirt and gravel.

We explored for two hours without seeing a human being or a man-made structure of any kind before arriving at our first safari lodge, the Tarangire Sopa Lodge. We had no idea what to expect to find in the bush, but opening the doors led to a true shock: modern, contemporary furniture; high, wood-beamed ceilings; huge glass windows opening onto a panoramic view; and colorfully dressed employees offering cool towels and glasses of passion fruit juice.

https://www.AfricaSafari.com/into_the_bush.cfm
Call us at 800-291-3346 or inquire about a vacation here.
Open Mon-Fri 8am to 6pm, U.S. Central Time
Our office will reopen in 54 hours and 35 minutes.
Other Vacations
Guided Tours
River Cruises
Hotels & Resorts
Oceangoing Cruises
Site Info
About Us
Contact Us
International Visitors
Site Map
Terms & Conditions