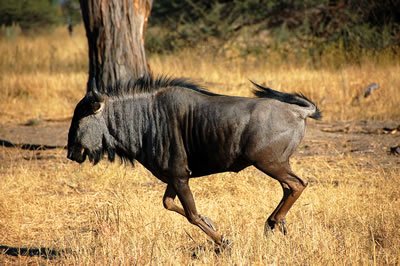 As the light drains from the African sky, the stars appear, first one and then a hundred and then a thousand, until the heavens above Botswana are in full bloom. Staring up at this diamond-studded canopy on a cool winter night, with my back to the warm campfire, it's easy to appreciate what a small role we play on the big stage.

Maybe it's Africa itself -- untamed and timeless -- that's put me in the mood for a flight through the galaxy. Or maybe it's the Amarula -- a popular, South African after-dinner drink that goes down a bit too easily.

I am in the Savute Elephant Camp at Chobe National Park, our third Orient-Express tented camp and the final stop on our safari. Each flight in Botswana has taken us to an exotic new environment and a unique ecosystem.

Eagle Island was a lush, green water world in the heart of the Okavango Delta. Khwai River was a mixed wet-and-dry location with leadwood and fig tree forests. Savute is dry. Bone dry. Kalahari Desert dry.

We flew in yesterday from Khwai River, and as we entered the park we couldn't help but notice the rules posted at the game warden's hut:

Rule No. 1: Do not sleep outside your tent or you will be eaten by animals.

Frankly, that made the other rules seem a bit trivial.

Chobe National Park is known for its diverse and plentiful wildlife and for an elephant population that is estimated at 120,000, including the largest elephants on Earth.

Fittingly, less than 50 yards from where I stand and about 20 feet below the high ground we occupy, 10 enormous elephants are jostling for position at a man-made watering hole.

Watching the continuous struggle for dominance play out under a spotlight, I find myself wishing for a much larger water trough or for a traffic cop to intercede, as the big and strong chase away the meek and the undersized.

Smaller elephants try to slip in unnoticed but quickly back away when challenged. They return to the shadows, too thirsty to leave but afraid even to stare at the superior males.

Large elephants that approach usually attempt to force their way in and always draw the attention of another huge animal. That leads to a lot of head shaking and posturing -- ever been to an NFL game? -- and if neither backs off, they will eventually butt heads to determine which is stronger. Immediately, the vanquished will shuffle away.

Just after dawn this morning, I pulled on a couple of layers against the chill and stepped out of my tent to an unexpected treat. Two hundred yards straight ahead, moving from my right to my left, an adult male lion was crossing the sand toward the suddenly vacated watering hole. There is a nonchalant swagger in a lion's walk, and he threw a glance in my direction as if to say, "You'll be fine if you stay where you are," which I did.

That was the nearest I've been to a lion at this camp, but twice we've been so close to leopards that I could have reached my hand out of the truck and, well, had it bitten off. I didn't do that, but I did take a couple of hundred pictures of these sleek and beautiful animals.

This ends our final full day in the bush, and predictably, none of us are ready to leave. Anyone who's been here knows that Africa will steal your heart if you let her.

Tomorrow we'll chase the ostriches off the landing strip and board the smallest plane yet, a six-seater, for Maun, Botswana -- the nearest town, about 90 minutes away by air. From there, we fly south back to Johannesburg and a connection to an overnight flight to Cairo.

Egypt is the northeast corner of Africa, of course, so we have to fly back over this area to get there. All of which means that by 2 a.m. our EgyptAir flight will be just another bright spot in the Botswana night sky. Too bad I won't be here to see it.

I'll check in later from the banks of the Nile. Until then, keep your eyes on the stars... and pass the Amarula.

Alan Fox
Executive Chairman
Vacations To Go
To continue to the first leg of my safari in Uganda and Rwanda, click here. Or to start at the beginning of my Botswana and Zambia story, click here.
To view photos taken in Botswana or Zambia, click either country name.
For a complete list of safaris in Botswana or Zambia, click the country name.
For a list of all safaris operated by African Travel, click here.
To subscribe to our monthly newsletter, absolutely free of charge, please click here.
Email this Newsletter
Share using your email or copy and send the page link below.