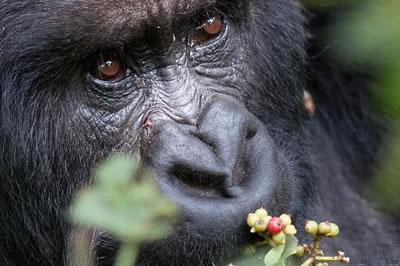 Dian Fossey arrived in Africa in 1966 to study critically endangered mountain gorillas. She found the several hundred that remained were under assault from every direction.

Poachers were maiming and killing the animals in traps set for antelope and buffalo. Locals were hunting them down to sell their hands and feet as ashtrays and their heads to be mounted on walls. Farmers were burning their habitat to make room for crops. Cash-strapped governments were selling baby gorillas to be shipped off to zoos in other countries.

The vast majority of these baby gorillas died before ever reaching a zoo. Worse still, because gorillas are so much like people, they will not give up their young without a fight. When a baby gorilla was found with a trafficker, there were always dead gorillas in the forest.

In Fossey's early encounters, the gentle and intelligent animals fled deeper into the jungle at first sight, a natural reaction considering their treatment at the hands of other humans.

But over time, Fossey learned to imitate common activities like scratching and feeding and to mimic the gorilla's own "contentment vocalizations," which made her less threatening. Eventually, she gained acceptance and was allowed to get closer to the families she studied. A National Geographic cover photo of Fossey among gorillas made her an instant celebrity and changed the world's false impression of gorillas as fierce beasts.

In 1977, poachers killed a gorilla named Digit, with which Fossey had established a special bond and trust over more than 10 years. Digit was a silverback that died protecting a pregnant female, which managed to escape. Digit was stabbed repeatedly and his head and hands were removed.

Heartbroken but undeterred, Fossey had Digit's remains carried back to her cabin and buried. She publicized his gruesome death and established the Digit Fund (now the Dian Fossey Gorilla Fund International, see gorillafund.org) to raise money for anti-poaching patrols and conservation.

Despite her celebrity and growing public sympathy for the plight of the mountain gorilla, Fossey frequently fought alone, an American woman living in a primitive cabin on the slopes of a volcano, half a world from home.

Against a rising tide, she held her ground, burning snares she found in the jungle, painting cattle that strayed into the forest so their owners would keep them out, attempting to convince poachers that she was a witch to frighten them away and demanding that local governments stop the trafficking in baby gorillas and gorilla parts.

Some said her methods and personal confrontations, which Fossey called "active conservation," were excessive. Her list of enemies grew.

Through a wall of bamboo, something large and dark was moving parallel to our group, but in the dim and dappled light, I could not make out what it was.

The tracker in front of me whacked vines and bamboo with his panga (machete) and the rest of us ducked and wiggled through the narrow opening he was creating in the nearly impenetrable forest.

We were trekking at 10,000 feet elevation on the Rwandan side of the Virunga Conservation Area, a mountainous jungle dominated by eight volcanoes and shared by DR Congo.

Ahead and above us, another dark mass appeared on top of the leafy canopy and the bamboo shuddered and creaked under its weight. Suddenly, amorphous black creatures seemed to be moving through the foliage all around us.

Our tracker uttered a low, grunting sound to reassure whatever was out there that we were not a threat.

With a few more swings of the panga, we burst into a small clearing, but it felt more like landing in another world. I froze in my tracks at the sight of a massive silverback gorilla calmly sitting on the ground, glancing directly at me.

Silverbacks are adult males more than 12 years of age with a wide band of silver hair across their backs. They are the largest primates on the planet, and may grow to 6 feet in height and weigh more than 500 pounds. Every gorilla family is headed by a silverback and some families have more than one.

As I fumbled with my camera and rattled off a dozen shots, I realized we were not alone. There were other gorillas moving into the clearing, mothers and babies, and still more in the shadows of the surrounding woods.

Each gorilla family has numerous adult females that mate exclusively with the dominant silverback, and we had learned in the pre-trek briefing that this family had one silverback and five females, each with a baby.

For 60 minutes (the maximum visitation allowed per gorilla family, per day), our group of eight tourists and two trackers watched the gorillas eat, play, communicate, climb and politely go about their business, always on the move.

We were keenly aware of their intelligence and I felt a bit like we were intruding on their solitude, but a steady flow of tourists is an essential part of the formula that keeps gorillas alive. The park fee of $500 per person, per day, to track the gorillas pays for the game wardens who protect the animals and their habitat.

More than 90% of gorilla DNA is identical to human DNA, and they are susceptible to human diseases. We were required to stay at least 22 feet away so we would not transfer any germs. This was easier said than done as the gorillas had not read the rules. They frequently walked up to us from behind or squeezed by us on narrow trails where all we could do was lean back on the bamboo curtain.

Baby gorillas play constantly and are amazingly cute little animals. We watched one tap another on the head and run, starting a frenzied game of tag. Later, a baby gorilla was holding a stalk of bamboo as if it was his own when his playmate came by and tried to climb it. They erupted into a mock fight, a tangle of rolling hands and feet and bared teeth, over and forgotten in an instant. (Please see today's slide show.)

Baby gorillas love to mimic the big silverbacks, and twice today a little fur ball walked up to me and beat its tiny chest in mock fury before skipping away.

Our hour with these magnificent creatures passed all too quickly.

For 19 years, Dian Fossey studied the habits and characteristics of these gentle giants, protected them, communicated with them and endeavored to tell the world of their precarious state. She founded the Karisoke Research Center, which has played a pivotal role in mountain gorilla research, conservation and protection for more than 40 years.

The work she began has resulted in stabilization and slight growth in the number of mountain gorillas, but still there are only 700 beating hearts left to the species. Surrounded by volcanoes, poachers, gorilla traffickers and habitat-destroying farmers, can they be saved?

It's a test of how far we humans have come in our evolution.

Not far from here, on a fateful night in 1985, Dian Fossey was killed with a panga, in her cabin. She was alone, and her murderer was never found. She left this chilling entry in her diary:

Fossey is buried where she died, high on the misty slopes of these volcanoes and beside her cherished Digit. Their modest graves mark heroic lives given willingly in defense of what they loved.

Perhaps one day we'll know these graves mark something even more important -- the turning point in a battle that was nearly lost.