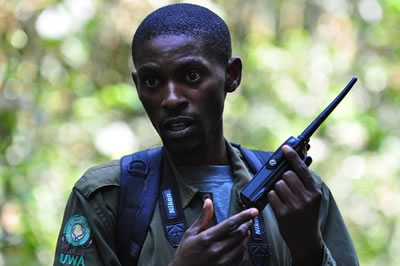 From Kibale to Ishasha

After two and one half hours of chimpanzee tracking in Uganda's Kibale National Park, home to 1,200 chimpanzees and 12 other species of primates, we had seen exactly two red-tailed monkeys, from a distance of about 100 yards.

Our group of six and our tracker, Gerald, were moving along a narrow trail under a thick canopy of leaves, past colossal trees towering up to 180 feet in the air. For the most part we could not see the tops of the tallest trees through the canopy, but occasionally we could get close to a trunk and look straight up and glimpse a tree of Jack-and-the-Beanstalk proportions.

None of us had said so but I knew we were all beginning to fear our half-day trek would be over before we found a chimpanzee, when suddenly there was a shriek unlike anything I have heard, in the distance.

"Listen, he is calling to others and they are not responding," said Gerald. "Maybe he is separated from the group. Follow me."

We left the path and barreled headlong into scrub trees and branches, doubling our pace in the direction of the sound we had heard. Within a few minutes we found them, one male and one female chimpanzee, high in a tree.

Gerald called another tracker on his radio and after a while a group the size of ours appeared and took up a position on the other side of the tree. For 30 minutes or so, we watched two big, dark balls of fur moving about, obscured by the branches, as they munched leaves and dropped twigs on our heads.

The foliage was so thick on the ground that we could no longer see the other group but we did hear them once, when one of the chimps relieved himself in their general direction. (Note to self: Avoid sightseeing from directly below a great ape.)

Suddenly, the male began to move lower on the branches, caught a vine and swung down to the ground with a thud, just a few feet in front of us. Male chimps sometimes exceed five feet in height and can reach 140 pounds, and it was only then that I realized the full extent of this chimp's size. The moment he landed, he disappeared into the bush.

Gerald called to us to follow him and we took off in pursuit, crashing through the plants and tree limbs, tripping on vines, moving up and down the hills as fast as we possibly could, with our cameras at the ready. We must have sounded like a herd of rampaging elephants (also found in this park) and I felt certain we were not about to sneak up on a leopard.

Then, without warning, our mischievous friend simply stopped and sat down. He was a fit-looking adult male with just a bit of gray creeping into his beard.

We came no closer than 20 feet as he posed graciously without the slightest interest in any of the humans there assembled. His brilliant facial expressions implied that he was either contemplating the mysteries of the universe or preparing to be beamed to the mother ship.

After a few minutes he scampered up the nearest tree and was gone for good, but not before providing a heart-pounding and satisfying climax to our first game park visit.

The next day we left Ndali Lodge and drove south to Queen Elizabeth National Park, the country's most-visited game reserve, with terrain that ranges from dry savannah to green, rolling hills to dense forests.

We made our way to the Kazinga Channel, a 22-mile-long natural waterway linking Uganda's Lake Edward and Lake George, and climbed aboard a boat for what would turn out to be nonstop game viewing by water. Hippos, elephants, Nile crocodiles, Cape buffalo, kingfishers, African fish eagles and many more species presented themselves in a two-hour tour. We headed south again, to the most remote region of the park and our next overnight destination, Ishasha Wilderness Camp. The camp consists of 10 large tents tucked into the trees along a river, tables for outdoor dining, a covered sitting area and a much appreciated recharging tent for batteries of all sorts.

There is a sink with running water and a portable toilet in each tent, but the only flushing toilets are communal, a short walk down the path from the tents.

As with other tented camps we have visited, there are no walls or fences keeping animals out, so we are not allowed to leave our tents unescorted, after dark.

Last night, we had the camp to ourselves, chatting with friendly camp proprietors Karen and Dave by the fireside and dining al fresco by the river. This afternoon, an Italian film crew arrived and took over the rest of the camp. They are here to film Ishasha's famous tree-climbing lions, but neither they nor we could find lions today.

Under Idi Amin, the park system nearly collapsed in Uganda. Soldiers and their friends entered the parks to kill game to sell, and corrupt game wardens were easily bribed to allow it. The animal populations plummeted and rhinos were wiped out completely, slaughtered for their horns, which were shipped to the Middle East and Asia to be carved into knife handles or ground into aphrodisiacs.

In recent years, most animal populations have recovered and there has been an effort to re-establish rhinos in Uganda. Last year, the first rhino birth in this country in 27 years occurred at the Ziwa Rhino Sanctuary. Amazingly, the mother is one of two white rhinos that arrived in Uganda in 2006 as a donation from Disney's Animal Kingdom in Orlando, part of the first-ever relocation of rhinos from the US to Africa.

On our game drives today, we saw herds of elephants and Cape buffalo and a variety of antelope, including Ugandan kob, topi and waterbucks. Other sightings included a family of crowned cranes (Uganda's national bird), sacred ibis, warthogs, vultures and a black forest cobra at least six feet in length.

Meanwhile, marching by or through camp, there were elephants, a hippo, a troop of black-and-white colobus monkeys and a red-tailed monkey.

Tonight, in the woods by the river at Ishasha Wilderness Camp, the only light I can see is coming from the screen of my computer. Outside these thin sheets of canvas, the night is alive with screeching, crunching, grunting and splashing noises, and every so often something bounces off the top of the tent.

Down the path at the communal toilet, twin tarantulas we have nicknamed "Fluffy" are standing by to greet the members of the Italian film crew. We met Fluffy earlier in the evening and believe they are essentially harmless, as long as the mere sight doesn't kill you.

Tomorrow we leave for the land of volcanoes, but for now I am happy to be back in the bush.