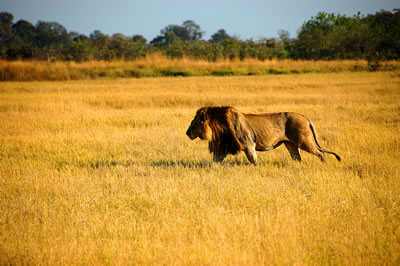 When the world was younger, the Okavango River flowed forcefully through what is now Botswana en route to the Indian Ocean. Then shifts in the tectonic plates that form the Earth's crust changed the elevation of the land. Now the Okavango loses its momentum here in the Kalahari Desert and never finds the sea, creating instead a series of lakes and channels known as the Okavango Delta.

The delta is an amazing natural phenomenon, pristine and remote and virtually untouched by man. It is home to a rich array of rare and exotic birds and animals, plus Eagle Island Camp, which we left yesterday morning.

We took off in cloudless blue skies and crossed quickly from that lush, green oasis to brown sand dotted with camel thorn acacias and dried lake beds that looked like craters from the air. An hour later, our 12-passenger Cessna Grand Caravan touched down at our second stop in Botswana, Khwai River Lodge.

Technically, we're still on the very edge of the Okavango Delta, but the annual floodwaters that swell the delta and refill the vital water holes have not reached this far yet. There is enough water in the river, now a creek, to sustain the wildlife, but away from the river the land is dry, and game viewing is done not by boat but via open-air Land Cruisers.

We've had three game drives so far, and the highlights included an extended encounter with an old male lion that was calling to a hidden companion in the forest, and a photo op with a hyena suckling two pups. It's not necessary to venture out to see animals, however.

Today, between game drives, we watched elephants, hippos and impalas from our front porch. There was a troop of baboons in camp most of the afternoon, along with colorful birds including the yellow-billed hornbill and the spectacular lilac-breasted roller. Last night, we heard the roar of lions as they wandered through the camp, and hippos walked between our raised tent and the next one down.

Like Eagle Island, Khwai is a tented camp, but the reality of these camps is that they're five-star all the way, with excellent food served alfresco, twice-daily tent-keeping service, king beds, wood floors and heat at night until 11:30 p.m., when generators are turned off to conserve energy. When you finally make it to bed, you'll find it's been warmed by a hot water bottle, another nice touch considering the temperature will fall into the 40s on this crisp winter evening.

After sunset tonight, we piled into safari trucks and drove into the bush. As we bounced along the dirt road, our driver probed the trees and undergrowth with a spotlight, calling out the type of animal that went with each pair of eyes that shone back.

After a short ride, we arrived at a small, circular fort made of logs and lighted entirely by torches, called a boma. In Botswana, a boma is used for important tribal gatherings, but tonight we enjoyed a gracious buffet dinner and a serenade of traditional music by employees of the camp. There was nothing too familiar on the table, which was fine with me. The warthog was good, and the kudu sausage was even better.

We have one stop left on our safari, but it's already quite clear how the Botswana experience differs from my East African adventure. In Tanzania, and Kenya as well, there are far more people, cities, towns and markets, and much greater interaction with the local people as you drive from one game reserve to the next. On my last Africa trip, I enjoyed my visit to a Maasai school and village immensely.

Here in sparsely populated Botswana, where roads are few and rugged, travel is via small planes between intimate and isolated camps that house a maximum of 30 guests. At times, we feel as though we have the entire country to ourselves. It is a supremely peaceful, back-to-nature experience.

As far as wildlife, the game reserves of Tanzania and Kenya are more hospitable in terms of water supply and vegetation than the Kalahari, which is one of the world's largest deserts. There are still animals here at every turn, but we haven't seen the huge herds we saw in the Great Migration of East Africa.

Is one experience better than the other? I don't think so. Each is truly outstanding in its own way.