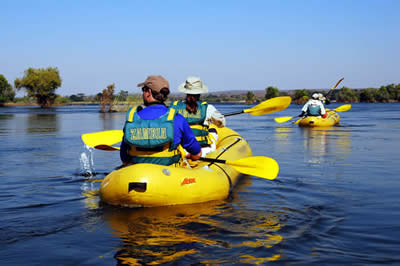 The elephant-back safari was an included feature of our customized itinerary, but our canoe trip through the crocodile- and hippo-filled waters of the Zambezi was arranged separately and is only for the physically fit and adventurous. This is not a good place to learn how to canoe, it is not suited for children or the elderly, and perhaps it is not even suited for people in their right minds.

Still, there we were, signing waivers and climbing into inflatable two-person canoes and setting off into a 25-mile-an-hour headwind that produced little waves with whitecaps that were actually blowing upstream. We pointed our canoes toward the Zimbabwe side of the broad Zambezi, paddling strenuously to make any headway at all in a downstream direction.

Twenty minutes into our float, we spotted our first hippos. Before coming to Africa, I had assumed that hippos were like extra-wide cows in water, basically harmless. In fact, hippos kill more people than lions or crocs, generally when someone has inadvertently come between the animals and the water, causing them to panic, or between a mother and her young.

We didn't have to worry about the former in a canoe, but hippos can hold their breath for five to six minutes, so I wondered how we would know if we were passing close to a nervous mother just under the surface. Our guide's canoe was always in the lead, and he must have done an excellent job spotting hippos in advance, because we saw many in and out of the water but were never close enough to be concerned.

Frankly, it was the crocodiles that had my attention. The first one we saw was small, about 4 feet in length, resting on a root in the shade of a tree that was leaning precariously over the river. We were close before we saw him at eye level, and he watched us pass within 10 yards.

I could almost read his mind: "Mmmmm, I wonder what that one tastes like."

Almost immediately, we saw two more, and they were enormous, more than 12 feet long and sunning just a few feet from the water.

Soon the river took a sharp turn and split into forks separated by islands, and the wind no longer impeded our progress downstream. We were in one of these forks when we heard something we had not expected--the roar of upcoming white water.

The literature I'd read described our trip as a lazy float downriver, and I certainly would not have brought my family to this crocodile feeding ground if I had known there was a possibility of capsizing. We'd find out later that particularly heavy rains had raised the river and created these conditions, but there was nothing we could do but proceed.

The first rapids were exciting but manageable, as were the second and third, but there was something unusual about the way the forks came together at the downstream ends of islands. The currents seemed to collide more than merge, with some forks apparently deeper than others and some currents actually appearing to run upstream.

I had just noticed this phenomenon when suddenly the front of our canoe spun 90 degrees from its downstream orientation, turning us broadside in the rapids. We paddled furiously, managing to right the canoe against the pressures that wanted to spin us around, but we were caught in an area of churning water, and all forward progress had ceased.

"Paddle as hard as you can," I called out to my wife in the front, "we're stuck." We pounded the water with all our might, marking our movement against a spot on the shore. As we pulled on our paddles we'd move forward a foot or two, but when the paddles were out of the water between thrusts, we'd drop back again.

After several long minutes, we covered the 20 yards to the edge of the whirlpool and escaped its grasp, but our relief was short lived. Up ahead, we could see that one of our canoes had lost its stern paddler. Someone in our party had been bounced from his boat and was swimming with the crocodiles! We spotted a bobbing head being swept downstream, swimming frantically toward the lead canoe. The guide quickly hoisted him out of the water -- intact.

The rest of our three-hour journey was peaceful -- relatively speaking -- as we drifted by elephants, giraffes, baboons and monkeys in the national parks on both sides of the river. The shadows were long by the time we pulled our canoes ashore near two large and amorous monitor lizards and boarded a van for the hotel.

Tomorrow, we will drive west to the border with Botswana, cross the Zambezi by boat (motorboat, I hope) and take a bush plane into the remote and unspoiled Okavango Delta. We will leave the Smoke That Thunders and the gentle people of Zambia with nothing but fond memories.

If you're looking for a place to begin a safari, Victoria Falls is as wondrous as any. But do stay out of the water.