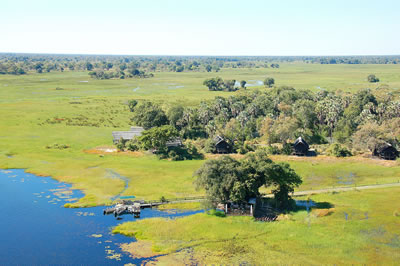 Over the Okavango Delta

We fidgeted as we stood by the small airstrip and watched the chopper pilot refuel. One day into the Botswana portion of our safari, we'd signed up for an optional sightseeing tour by air that was highly touted by other guests we'd met at last night's campfire.

The helicopter held four passengers, one next to the pilot and three in the row behind. We had drawn straws for seating assignments before we left camp: winner to sit by the pilot in the front row, loser in the middle of the back row and the other two getting back-row window seats.

We climbed in and fastened our seatbelts, and as the pilot came around to check mine, he shouted over the roar of the rotors, "It's okay to ride with your foot on the skid."

I was still wondering if I would even be able to ride without doors, so this new mental picture took me aback. I turned to my son, secure in his middle seat, with the raised-eyebrows sign we always use when one of us has just realized what he's gotten himself into. He smiled back without so much as a trace of pity.

Carefully, I slid partially off my seat, slipped my right leg out of the chopper and lowered a foot down to a runner that was about halfway to the ground. I held my camera with both hands, but as we lifted off I noticed that my seatbelt suddenly seemed quite flimsy, so I gripped the back of the pilot's chair with my left hand, white-knuckle style.

Our pilot was an intrepid young Kiwi named Trent, and with a bit of flair he followed the short runway to the end, like a bush plane taking off, then banked into a rising 180-degree turn to take us over our tented camp before sweeping out into the Okavango Delta.

The first animal we spotted was a showstopper, an adult giraffe wading shin deep across a pool of lily pads and casting a long shadow on the water. I took a half dozen blurry pictures as we sailed over his head, some shooting almost straight down, and gave thanks for having lost the draw for the seat in the cockpit.

For an hour, we soared above the emerald green foliage and royal blue water of the delta, literally never out of sight of the animals we had come to see. There were Nile crocodiles, zebras, elephants, impalas, kudus, waterbucks, eagles, wildebeest -- the list went on and on. We saw hippos sunning on islands and lumbering along underwater, single file, at the bottom of a crystal-clear canal.

There are countless islands in the delta, and our pilot would gain altitude as we crossed them and then swoop down low and fast across the lakes and channels, a major adrenaline rush that set our hearts pounding.

We arrived in Botswana yesterday, at the first of three tented camps we will visit, all run by Orient-Express. We flew over the Kalahari Desert for 90 minutes to get here and never once saw a city, a village, a house, a car or a road. "Off the beaten path" doesn't begin to describe it.

Our first camp is called Eagle Island and home to 12 guest tents on raised wooden platforms, each facing the water. We are completely surrounded by the delta, and the camp is accessible only by air for most of the year. There is a small gift shop, a dining room for breakfast on chilly mornings, an open-air dining area by the water and a communal campfire.

Unlike most safari lodges, game viewing here is done by mokoro -- a dugout canoe poled through the reeds by a guide standing in the back -- or by motorboat or on foot. On the water, crocs and hippos abound, along with giant monitor lizards and birds such as the brightly colored malachite kingfisher. On land, you never know what you might find. We saw elephants and herds of impalas and zebras and heard the distant roar of a lion on our treks.

One of the true highlights of this magical camp is a big, affable Botswanan named Onx, part naturalist, part guide and part storyteller. Among his many talents, Onx is an expert tracker, which requires not only the ability to recognize a footprint but also the knack for telling the origin and age of, for lack of a better word, poop.

"Hyena poop," he pointed out, on one walk. "Leopard print," he explained, a few minutes later. "Fresh elephant dung" -- well, even I could identify that one.

On one island, Onx walked up to an active, 8-foot-tall termite mound and broke off a piece of the hard, gray shell and plopped it in his mouth. "Termite mounds are made out of termite dung," he explained. "Some people think it is quite good. Who wants to try it?"

There are times in one's life when a golden opportunity to do something stupid presents itself, but good sense ultimately prevails. This was not one of those times. In the spirit of "when in Rome," I bit into a marble-sized chunk of termite dung, and now I can authoritatively report that there is no good reason for you to ever do the same.

Sunset in the delta brings its own special moments. Last night, through the thin canvas walls of our tent, we listened to hippos grunting from the water and baboons screaming at a leopard. Tonight, we dined by the water on crocodile and bream before retiring to the campfire to discuss the day's events and trade regrets about how quickly our time here had passed. Tomorrow we fly to a new tented camp.

Perhaps one day you will visit Eagle Island, and if you do, my wish for you is simple -- an hour with your foot on the runner.