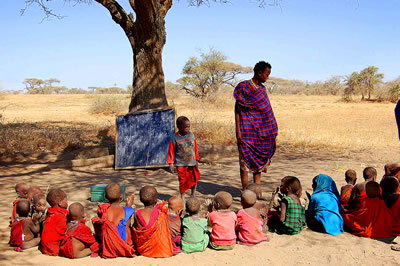 Leaving Ngorongoro Crater, we drove into a desertlike region devoid of any trace of modern civilization. Our four safari trucks were balls of swirling dust as we arrived at a remote Maasai village, where mud huts were arranged in a circle and surrounded by a barrier made of thorn-covered branches. A sandstorm was subsiding as we exited our vehicles, and every person and thing in the village wore a new coat of dust.

The Maasai chanted and sang for us, then showed the men in our group how to throw a spear while the women learned a traditional dance. Despite strong gusts of wind, Maasai warriors built a fire using only sticks, in less than two minutes. They invited us into their homes, each of which was about 8 feet by 8 feet and less than 4 feet high. We visited the village "school," a blackboard under an acacia tree, where the youngest children sang their ABCs to us in English.

Then we were off to what the Maasai call Siringitu, the place where the land goes on forever. I've heard about the Serengeti all my life, and more than anything else, it was the world's most famous game reserve that brought me to Tanzania.

At the southwestern entrance of the park, the land is flat for as far as the eye can see, with few trees or bushes and grass that bakes brown early in the dry season. There is little cover for the animals and none for giraffes, which looked like poles far out on the plains.

Fires are set at this time of year to control the insects and to clear the way for fuller new growth when the rains return. We came across these intentional burns several times during our four days in the Serengeti, sometimes coming close enough to smell the smoke and see the flames.

Three hours into the park, the land began to roll and the trees became more plentiful. We came to a small stream lined with foliage, which we followed for miles. We saw our first leopard resting on a limb near the water, and more animals of every type.

We happened upon a very skittish herd of zebras at a watering hole. They were barking and snorting and obviously distressed, and as our safari truck approached, they parted to reveal the carcass of a freshly killed zebra, which had not been eaten.

Our guide explained that lions usually need to rest after the exertion of a kill and return to feed when they have regained their appetites. We parked less than 10 yards from the animal and waited. Within minutes the nervous zebras disappeared, and we spotted two female lions slinking slowly in our direction in the tall grass.

The first lion to reach the edge of the clearing paused briefly and walked casually to the zebra while surveying the surroundings, including our truck. She began to devour the zebra, so close to us that we could hear the sound of the skin tearing and the flesh being ripped from the bones.

Leaving the lions behind, we bounced along a dusty road as the land turned more rocky and rugged and spectacularly beautiful. We rounded a turn to find a sea of large animals pushing through the trees ahead of us.

We had located the Great Migration, the annual movement of 2 million animals (including 1 million wildebeest and 200,000 zebras) through Tanzania and Kenya, driven by seasonal rain and drought. We stopped our truck and let the noise and the dust and the movement surround us. This is why we came to Tanzania in June -- an experience that is unlike anything else on Earth.

We spent two nights at the Serengeti Serena Lodge, a comfortable compound of round guest bungalows with open-air dining rooms, swimming pool, TV room and a computer with an Internet connection. The lodge is perched on a hilltop, surrounded by tall trees, and from the pool I could see giraffes and elephants in the valley below.

As with all the lodges we visited, the staff was well-trained and hospitable, and they quickly mustered an armed response when Cape buffaloes wandered through the grounds early the first evening we were there. Fortunately, the animals left peacefully.

On our first night in the Serengeti, I closed the mosquito nets and lay in bed recalling how the gentle zebras had mourned their fallen comrade. I was reminded of an old African proverb that I had read before leaving the United States:

Every morning in Africa, a gazelle wakes up. It knows it must run faster than the fastest lion or it will be killed.

Every morning a lion wakes up. It knows that it must outrun the slowest gazelle or it will starve to death.

It does not matter whether you are a lion or a gazelle... when the sun comes up, you'd better be running.

https://www.AfricaSafari.com/the_great_migration.cfm
Call us at 800-291-3346 or inquire about a vacation here.
Open Mon-Fri 8am to 6pm, U.S. Central Time
Our office will reopen in 54 hours and 23 minutes.
Other Vacations
Guided Tours
River Cruises
Hotels & Resorts
Oceangoing Cruises
Site Info
About Us
Contact Us
International Visitors
Site Map
Terms & Conditions